Network Magazine and Cyient recently hosted a roundtable discussion where the subject of proactive data management being the key to the future energy system was discussed. Tom Grimwood reports. 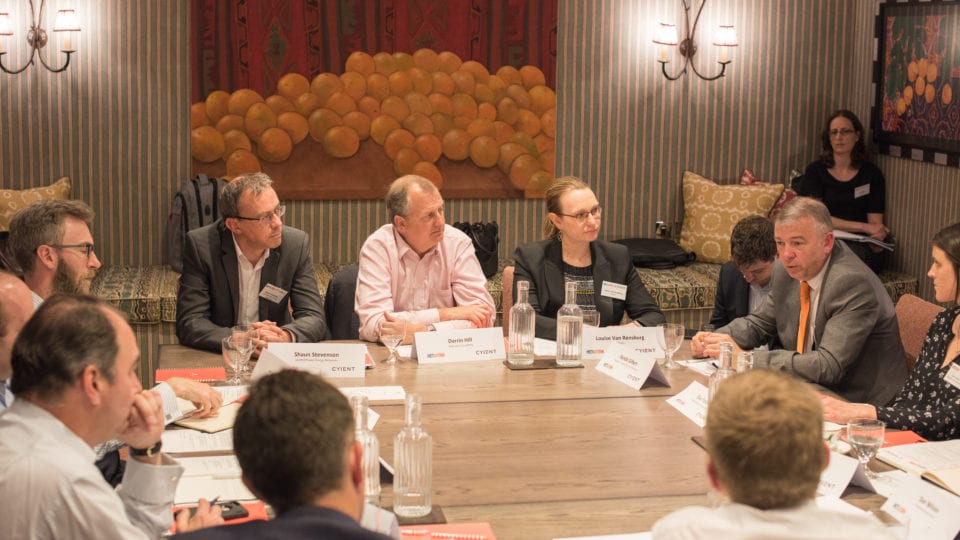 The decarbonisation of the energy system is driving energy networks to become smarter, more flexible and more closely integrated.

This transformation will be fuelled by data. Without knowledge of what is happening on their networks, operators will be unable to squeeze the most use out of their assets, and keep the UK heated and powered at the lowest cost to consumers.

At a roundtable hosted by Network last month, industry figures came together to talk over some of the issues they face around data. The first topic for discussion was the ways in which networks will use the data they collect going forward.

Several attendees noted that distribution network operators are missing information they now need to know about their assets, because many of them were installed decades ago when recording this data was deemed to be unnecessary. They said making inferences from newly collected data, including that from smart meters, could enable them to fill in these blanks.

Participants said another important use for data will be establishing whether new connections can be accommodated on networks. Response times for specific requests can be reduced from weeks to just minutes. Data can also be used to produce projections that can be distributed to potential connections customers.

Furthermore, they said the growth of new technologies such as electric vehicles, distributed renewable generation and more energy efficient appliances is leading to the breakdown of the old demand assumptions on which the operation of the power grid is based. Data can be used to refresh these assumptions.

Attendees said one of the main challenges they face is establishing a “single source of truth” from data they collect. Much of it is siloed within different files and IT systems and needs to be brought together.

As part of this, they said data should be separated from the systems in which they reside. The rapid pace of change in the sector means the lifespans of individual IT systems are likely to become shorter over time. Data needs to be more easily transferable between the old and the new.

They said geospatial information systems are becoming increasingly important to the use of data by networks. They are no longer just digitalised maps used to provide information to third parties. Instead, they are becoming hubs for data, which can be rendered in many different ways depending on the purpose for which it is required. They can be used to prioritise projects and bundle them together, so the work they do is more cost-efficient.

Networks’ approach to data-sharing should move away from a “need-to-know” basis to a presumption of disclosure. In particular, there must be a greater level of data-sharing between gas and electricity networks. Gas network representatives, for example, said they require more information about the likely demand from the growing number of gas peaking plants connected to distribution networks.

Smart meter data was identified as a crucial source of information. Participants said more needs to be done to sell consumers on the new technology. Fears were raised that the current interoperability of SMETS1 smart meters could leave then with a poor first impression.

Attendees agreed that many consumers overestimate the amount of information which networks already possess. They said greater transparency over the limits of their knowledge could increase willingness to participate in the collection of data. The benefits of smart meters for the environment and the reliability of supplies could also be touted to consumers.

There was agreement too over the importance of collecting data in the right manner. Getting things right at the beginning will prevent problems further down the line.

However, there was some division over how wide the net should be cast. Several network operators recounted how they had collected whole streams of data which they had never actually used, wasting time and money. They said data shouldn’t be collected for its own sake. There should always be a clear purpose in mind.

However, others worried that being too selective could stifle innovation as some uses for data have yet to emerge. They said network operators need to consult closely with stakeholders to ensure they account for the needs of others and not just themselves.

Participants said maximising the value which can be extracted from data requires a radical change in the culture of networks, including full-buy-in from senior executives. Progress is being made, as demonstrated by the increasing number of roles focused solely on data. Offices are being reorganised to bring data organisers and asset managers closer together, not just metaphorically but also in the literal sense.

With all that being said, the transformation is still far from complete. The era of data-driven networks is only just beginning.