The emergence of EVs

A roundtable discussion hosted by Network, in conjunction with the Energy Systems Catapult, centred around why a whole systems perspective is required if stakeholders are to respond most effectively to the challenges and opportunities that arise in the take-up of electric vehicles. Alec Peachey reports. 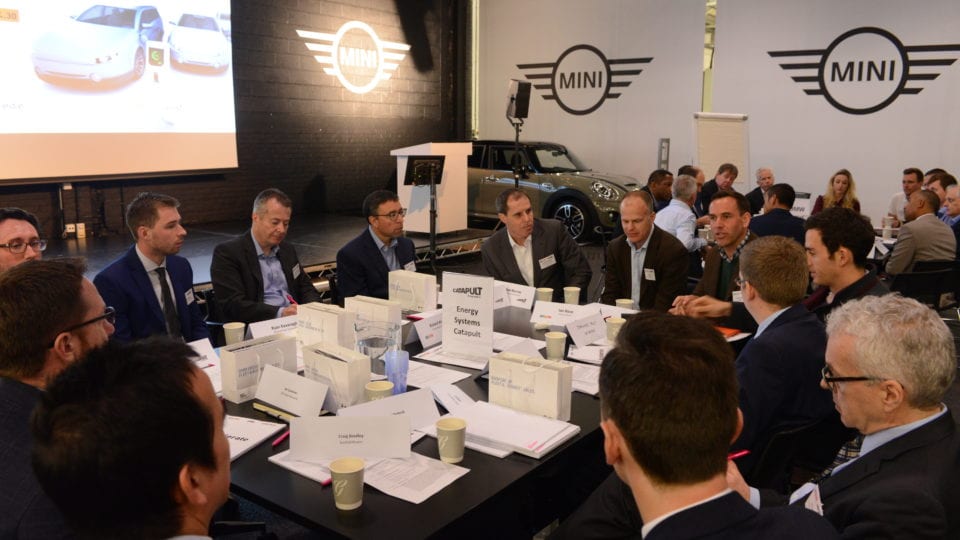 Senior stakeholders from the energy and automotive sectors, together with their customers, came together to discuss the preparations needed for the mass take-up of electric vehicles at a symposium event last month.

Held at the MINI Plant Oxford – Accelerate – featured four working parties who all participated in roundtable discussions to discuss the key challenges and opportunities facing businesses in making the EV transition.

Hosted by Network and its sister brands Utility Week and edie, the event also provided participants with an opportunity to take their own electric vehicle test drive and tour of the plant.

The day started with a keynote address from Jonathan Murray, policy and operations director, Low Carbon Vehicle Partnership – before attendees heard from the event partners, namely:

During the Energy Systems Catapult roundtable discussion, a number of topics were up for debate including:

“One of the interesting things I’ve heard recently is that the IET, who own the wiring regulations, are thinking that maybe there’s an unexpected way to impact on this by embedding some of this thinking in the wiring regs and as you build buildings you make it mandatory that these things are part of how you wire things up,” remarked one.

Another said: “The 18th edition of wiring regs does actually include quite a lot of EV content. They’ve just been released for consultation. If that’s backed up by some government legislation in terms of including EV infrastructure in buildings then that’s probably what we need.”

Another participant commented that he could see a future where all new homes are smart homes with embedded EV infrastructure.

They said: “California has just announced that if a building can have a solar panel then it has to have one. Can you imagine a UK in 20, 30 or 40 years from now where smart technology has become so inexpensive and so available that every new home is a smart home and that there are minimum requirements for EV charge points in multi-dwelling units.”

One contributor was strongly in favour of this vision, adding: “It’s a no brainer that we should be ensuring that every new build has the capability to have EV charging and has the capability to be smart. Building it into a new build is cheaper than having to go back and retro-fit or upgrade. A lot of the focus has to be on what do we need to put in place that will allow us to have a no regret time in the next decade, so we can build upon that. I don’t think it is just domestic, I think we’ve got to start looking at retail and commercial properties.”

Discussion then turned to public charging and on street infrastructure. Some of the distribution network operators around the table agreed that they’re not able to invest before need so it’s not clear how infrastructure gets built.

“There’s a lot of infrastructure in this country that is built ahead of need or is built in anticipation of need,” one observer commented. “Or if it’s built after, it’s late and that’s a political problem. Why are electricity networks different? Can we imagine a regulatory environment where it would be possible to be more agile and responsive to need?”

Another countered, by stating: “We’re currently a product of the current regulation. That doesn’t mean that DNOs don’t want to build or can’t build. There might be something that comes up soon that says we can under certain criteria.”

Participants around the table debated the subject of vehicle-to-grid (V2G) technology – the idea of providing balancing and flexibility services using EV battery stores that connect directly to the grid.

“I would suggest that it’s a nonsense,” argued one. “The OEMs and the car manufacturers are going to warranty a battery, are they going to allow you to keep charging it and discharging it?”

Another agreed: “I think it’s limited in what it can deliver. I don’t think it’s the golden goose that everyone thinks it is going to be.”

One participant offered up an opposing view: “All those things are immaterial because we’re using a model that says you own the batteries. If you don’t own the battery you don’t care. You’re buying the vehicle and the service. And that battery is probably going to be owned by either an energy supplier, an aggregator or a vehicle manufacturer. Nissan warranty their battery for 10 years. It’s a source of storage and if you scale that up it is moveable storage. I think it has got great potential.”

“What about the infrastructure?,” questioned another.

“I think you’ve got all the infrastructure,” came the answer. “You’ve got a charge point today that only goes one way. In the UK we need to change that around and put in a charge point that is bi-directional. Power can go both ways on a network.”

Attendees around the table were asked if it’s fair for the cost of infrastructure to be paid for by members of society who don’t have EVs?

“I think it probably is because the driving force behind this is climate change and air quality,” came one response. “Those fundamentally are the driving forces for EVs and zero emission vehicles – and everybody benefits from that.”

Another cautioned that the electrification of transport will not be enough to achieve air quality objectives.

During the summing up those around the table were asked what the EV situation might look like in 2025.

“I think the regulatory environment will be very different,” remarked one. “I think it will be simpler. I think there will be one regulator and they will be focused on pricing at the pump. There will be an opportunity for energy suppliers to pay real costs because the DNOs will have huge visibility of the system. I’m feeling very bullish. I think we’ll be approaching a point where real time smart meter data in its entirety will be much more available to DNOs.”

Another commented that there will be an increase in the number of hybrid vehicles and that this will accelerate the demise of petrol and diesel vehicles.

He said: “I think my next car is going to be a plug-in hybrid. My next car after that will probably be an EV. I don’t think I’ll have one by 2025, but I’ll be on the journey towards it.”

Progress continues to be made in advancing the technology and infrastructure needed for the mass deployment of EVs, but for now the journey continues.