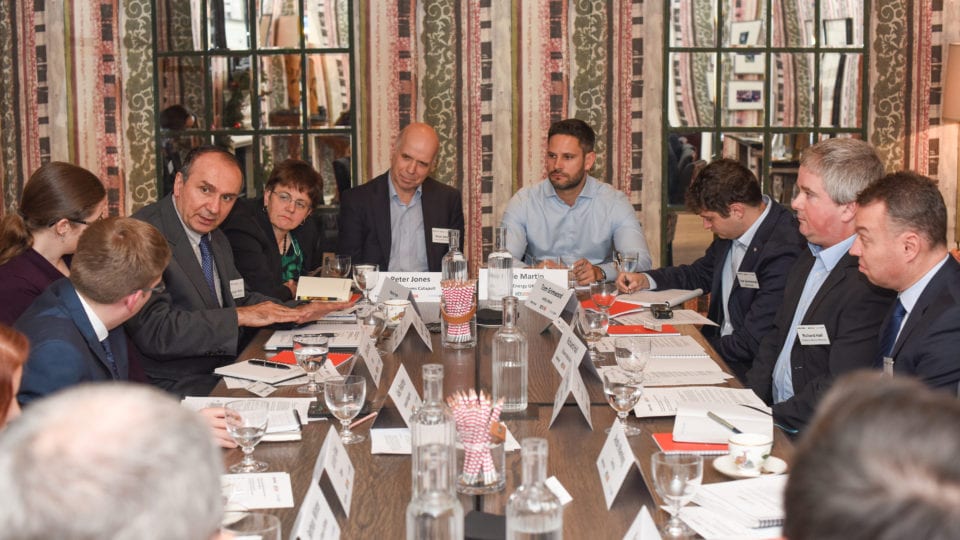 “Whole-system” is a phrase you often hear during discussions around energy. Being used so frequently and within so many different contexts, its meaning can sometimes seem vague.

So, when Network and National Grid hosted a roundtable in late 2018, the first topic on the agenda was what exactly constitutes the whole-system.

Attendees admitted the whole-system could in theory refer to a variety of things and were divided on where the line should be drawn.

They agreed it should at least stretch across both transmission and distribution and gas and electricity, with much of transport being absorbed into the power sector over time. But some argued it should also cover other essential utilities, for instance water.

“There’s been quite a bit of renewal of water assets,” said one, noting the potential of water pumps to provide significant volumes of flexibility to the power grid. “But they’re being renewed without thinking about the link with the electricity system.”

Others went further, saying the whole-system could even encompass the entirety of the economy. Networks are ultimately to try to save money for energy users, who are becoming increasingly involved in the running of the energy system themselves.

However, another warned they shouldn’t try to run before they can walk: “I wonder if the definition of whole-system including everything is just too wide at the moment to get a grip on.

“You set incremental small goals and then you can broaden it out as you get further along, rather than trying to define it in a really broad way which is then impossible to make any tangible progress against.”

Unable to settle on a concrete definition, the conversation nevertheless shifted to some of the obstacles that will need to be overcome.

Most identified the lack of a joined up regulatory, policy and market framework as the overarching barrier to progress.

They said whole-system solutions will require consistent price signals and incentives that allow actors in one sphere to share the gains that accrue in another, particularly in instances where they would otherwise stand to make a loss.

Without these in place, they will continue to operate in financial siloes and lucrative opportunities will be missed. Cross-sector incentives should be integrated into the next set of price controls.

One attendee noted the difficulty in valuing the whole-system benefits of a particular action, or even establishing the baseline to measure against. Several suggested new institutions such a whole-system operator or multi-utility regulator may be required to support such a framework.

Another blamed its absence on the short-term, incremental thinking, which they believed had become “dominant” among policy-makers.

They said the government must take a longer-term, more strategic view as it did when deciding to build the national electricity transmission network shortly after the Second World War: “These assets were only fully used 25 years later. If we had an incremental view at the time, the overall infrastructure costs would have been 10 times larger.”

That said, they also recognised the scale of the challenge: “We’ve not really found this being resolved anywhere. The UK, given its position as an island and also the combination of nuclear and renewables, will be facing these challenges five to 10 years before Europe and the US, for example. Can we turn this in to an opportunity and start really addressing this, and potentially leading this?”

Several questioned whether policy-makers were in a position yet to move towards an enduring solution.

“Frameworks will always limit what is possible by their very nature,” said one. “You create a structure of rules and then you’re basically saying that certain things are not allowed.

“Do we think, particularly in relation to some of the absolutely massive questions we have in GB at the moment – say around the future of heat – that we’re actually in the space to do that yet? I’m not sure we are.”

“If one looks at the somewhat chaotic disorderly approach, one might argue we’ve followed to date, we’ve actually been remarkably successful in terms of the progress we’ve made in decarbonising,” added another. “One could make the argument that the absence of a whole-system view hasn’t necessarily precluded significant progress. If you go to a whole-systems view, you do start getting into a position where you are starting to nail down some of those options.”

Both emphasised the need to put consumers at the centre of decision making: “Unless we bring consumers with us, we might as well whistle because it’s not going to work.”

There was agreement that pursuing some options for the future of the energy system would rule out others, and that in many cases it is still too early to make big strategic decisions. With regards to heat, attendees said there should be large-scale trials and demonstrations to provide an evidence base and a proper public debate to deliver a mandate.

Some therefore called for more value to be placed on optionality. “If it’s not going to cost much more to put in a fat cable compared to the cost of digging up the road, put in a fat cable,” remarked one. They said the response to uncertainty needed go beyond merely making “no regrets” decisions.

The table also agreed on the need for greater engagement with consumers to establish their needs and wants and how they are likely to interact with the energy system when presented with price signals and incentives.

Several attendees raised the tricky issue of how to design a framework which rewards certain desirable behaviours, without effectively punishing others. They expressed concerns that vulnerable customers – those who can least afford to – might end up paying the most for their energy.

On this front and many others, Britain obviously still has a long way to go to achieving a whole-system approach to energy.

“Generally people can come up with a technological solution when they’re looking at things with a whole-system approach. It’s a market pull mechanism which is the really difficult part. How do you design something which enables these things to be collectively financed and the benefits to be spread fairly over the various users of the system?

“We have to think about the design of institutions and how decisions get made in this system to recognise the fact there is much more interaction between the different parts of the system than there used to be.”

“Part of the problem is that costs and values aren’t currently easy to measure across the whole network. Things are measured in different units, it’s not obvious how efficiencies in one part of the system impact elsewhere and that’s before you even start to think about cost impacts.”