Electricity produced from wind, solar, biomass or hydro power exceeded electricity generated from fossil fuel sources in the third quarter of 2019, according to an analysis of government and industry data by climate change website Carbon Brief. 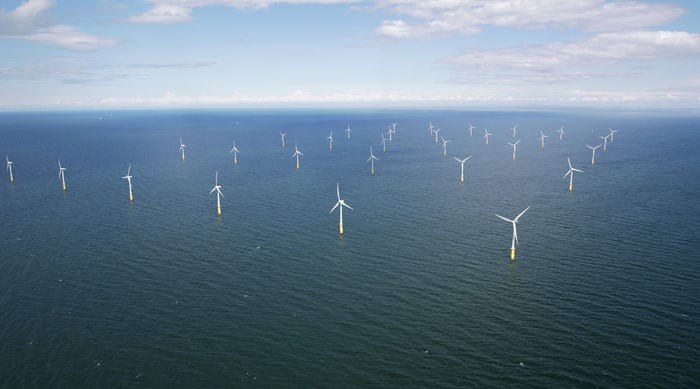 July, August and September saw renewables generating an estimated total of 29.5 terawatt hours (TWh), while fossil fuel sources accounted for 29.1TWh, according to its calculations.

That equates to a 40% share for renewables and 39% for fossil fuel-derived power, with the remaining 19% contributed by the nuclear power sector.

Carbon Brief says that renewables are unlikely to overtake fossil fuel sources across the 12 months of 2019, but it added that this milestone would soon be reached.

The analysis drew on data from the Department of Business, Energy and Industrial Strategy, and the sector’s Balancing Mechanism, the system of balancing energy supply and demand run by Elexon.

The 588MW Beatrice offshore windfarm in Scotland’s Moray Firth was completed in the second quarter of 2019.

Turbines in the 1,200 MW Hornsea One project, off the Yorkshire coast, have been phased in from February to October 2019, further adding to operating capacity.

As Carbon Brief also highlights, the picture was very different in 2010, when fossil fuel power stations produced more than 10 times as much electricity as the 26TWh that came from renewables.

Since then, electricity generation from renewable sources has more than quadrupled, while overall demand for electricity has fallen, leaving fossil fuels with a shrinking share of the total.

Gas, rather than coal, now contributes the majority of that shrinking total, as coal plants close down ahead of a planned phaseout in 2025.

The 39% from fossil fuels was made up of 38% from gas and less than 1% from coal and oil combined.

Other contributors to the recent increase in renewable generation include the 420MW Lynemouth biomass plant in Northumberland, which opened last year.

Using biomass to generate electricity is not zero-carbon and in some circumstances could lead to higher emissions than from fossil fuels.

The Hornsea One windfarm has also been in the news for disconnecting from the grid following a software failure on 9 August, an event that coincided with the Little Barford gas-fired powered station also going offline.

The loss of 790 MW from Hornsea, within a minute of losing 660MW from Barford, led to a drop in frequency on the network, which forced National Grid to stop supply to some end-users, causing the first power cut for a decade.