Western Power Distribution has completed a £350,000 project to replace an 11kV transformer at Marazion substation in Cornwall. 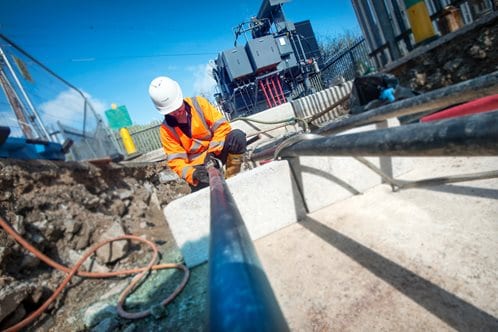 Work started in December 2017 following an internal transformer failure within the cable connection box, which breached its tank and caused a subsequent fire at the site. An environmental survey was carried out to determine if any contamination of the site or adjacent land had occurred.

Redruth project engineer Richard Clatworthy, who oversaw the project, said: “The survey determined that apart from some minor site contamination, the majority of the oil had been contained within the bunded area (an area that exists around all oil-filled plant to contain a spillage) or burnt off during the fire.”

Teams of fitters and jointers worked to replace the transformer in Marazion substation that feeds approximately 3,800 customers.

The work will further secure network reliability, but it wasn’t without its challenges, as Clatworthy explained: “There were extensive repairs and modifications to the bunded area and access driveway to accept the new transformer. The protection panels were updated and all associated 33kV, 11kV and multicore cables had to be replaced as they were damaged beyond repair.

“The site has a high water table, which meant that in addition to avoiding any environmental contamination, excavations needed to be continuously pumped to maintain access.”