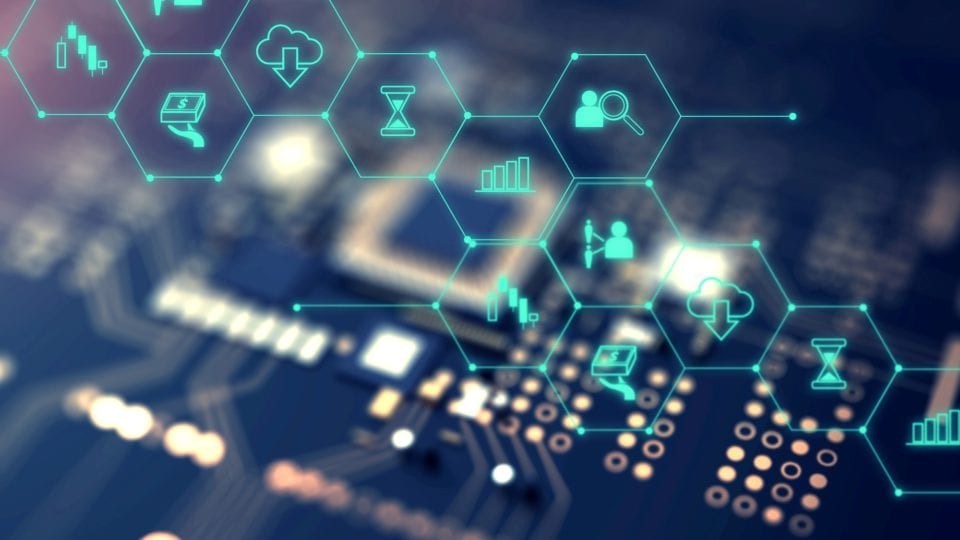 A blockchain is a decentralised data-ledger technology. That is, there is no central database, rather databases are held by multiple computers, each with an identical copy of the data. The system is maintained by a network of computers, in which successive data (in blocks of records) are first validated through a network consensus approach, and then added to the ledger. Each block in the chain contains a set of transactions represented by a hexadecimal ‘fingerprint’ known as a ‘hash’. This hash is passed on to the next block, thus creating the chain of blocks (see Figure 1 below). This enables computers on the network to easily verify whether any data in a block has been tampered with since altering the data within a block would affect its hash. The computers (called ‘nodes’) that participate in the network receive a complete copy of the blockchain, and stand as proof of every transaction ever executed on that particular system. The mutually validating network of nodes protect the coherence and integrity of the network and in doing so, avoid the need to use intermediaries to centralise all the data.

Benefits of blockchain include: (i) initiating and carrying out transactions directly, quickly and efficiently between users – i.e. peer-to-peer (P2P), with no ‘middleman’; (ii) providing transparency, as those with access to the blockchain can view the entire chain; and (iii) providing immediate credit settlement on transaction verification. (see Figure 2 below for illustration of a blockchain transaction).

Why is blockchain relevant to the electricity sector?

Blockchain is commonly known as the foundational technology that enables cryptocurrencies, such as Bitcoin. Bitcoin and blockchains should, however, be thought of differently. Bitcoin has no inherent value and represents no asset. By contrast, blockchains and tokens can represent many things including electrical power (and its attributable monetary value). Electricity markets with legacy infrastructure are facing major changes in the way in which electricity is generated, stored and consumed. In particular, the challenges presented (particularly for the DNOs) by a transition from fossil-fuel and nuclear based centralised generation to renewable and distributed generation, and the growth of small-scale domestic and commercial generation by ‘prosumers’ – who both consume and produce electricity themselves (e.g. through solar panels) and whose power flows are bidirectional. The characteristics of blockchain can offer some potential solutions to these challenges.

Electricity makes its way through various parts of the energy chain. Blockchain technology could be used to digitally track the exchange of electricity across a distributed grid, enabling the secure and transparent trade of electricity directly between consumers. A blockchain system can support a cryptocurrency in the form of tradable tokens, each representing one kilowatt-hour (kWh) of electrical power. The price of each token could be determined by regulator approved market access software parameters interfacing with market drivers established by the grid (think mobile phone Apps) and which might be designed to encourage sustainable and balanced network services (e.g. discourage long distance power transmission and peak demand use, and incentivise use of energy storage). A blockchain participant will require a digital wallet that can either be linked to a traditional bank account or charged up with digital currency. That individual’s participation software can then transact with other participants, by buying and selling tokens, with immediate credit settlement, to correspond with their electricity supply and demand requirements.

In Brooklyn, New York, start-up LO3 Technology has been running a test project enabling neighbours to buy and sell solar (PV) power between themselves via a blockchain platform. If customer ‘A’ has excess power available, then through the blockchain, ‘A’ can transfer that excess to the microgrid to enable customers who do not have a PV rooftop installation to purchase and use it. The Brooklyn microgrid demonstrates that the technology can be used to realise value in localised generation within a distribution network for the small-scale trading of environmentally friendly electricity.

The UK’s balancing codes and settlement systems do not allow for the level of P2P trading detailed above. Instead, the electricity generated by the prosumer can only be used on the generation site or delivered to the grid and sold to a supplier, usually at a nominal price. Capturing the full potential of distributed generation therefore requires new market models (and accompanying regulations, codes, and distribution use of system charging methodologies) to permit, and appropriately regulate P2P trading.

(b) Monitoring electricity consumption in a local network to minimise wastage

In the UK, Verv has claimed the first launch of a blockchain-powered P2P energy trading pilot at a housing estate in Hackney. The Verv platform is installed in around 40 participating flats throughout the community, allowing them to share renewably-sourced energy between one another. Solar panels were installed on 17 blocks of flats that make up the estate. The addition of communal battery storage systems, further allow the energy produced by the solar systems to be stored, shared and traded between flats to reduce electricity wastage. The project is being supported through Government grant funding to support UK industry regulator Ofgem, which is currently researching the potential for blockchain within its “regulatory sandbox”.

The increase in small-scale distributed generation, the resulting decrease in the scale of energy transactions and increase in trading volume create challenges for grid balancing. Blockchain can eliminate the need for a centralised approach to market clearing and trusted third parties, opening the way for a secure, transactive electricity environment where balancing is continuous.

London-based energy tech company Electron has been awarded substantial funding from the UK‘S Energy Entrepreneurs Fund to demonstrate how blockchain can transform the market for electricity grid balancing. Electron’s platform leverages blockchain technology to allow multiple parties to co-ordinate and share the value of a single consumer’s action.

3. A blockchain-based renewable energy trading platform as a means of obtaining project capital

One of the potential benefits of a blockchain-based energy trading system that employs tokens is that it could help renewable energy producers transact directly with energy buyers (whether they be end-users or investors (emphasis added)). A trading platform could therefore also permit the raising of project capital by issuing tokens for electricity to be produced and delivered in the future. Currently, renewable project developers typically need to demonstrate to funders that they have a revenue source for the plant’s offtake (giving greater certainty around income needed to repay sums due under limited recourse financing), for example by way of: (i) a long-term Power Purchase Agreement (PPA); or (ii) securing revenues through a support scheme, such as Feed-in Tariffs, the Renewables Obligation or its replacement, Allocation Rounds for Contracts for Differences. Initial coin offerings (ICOs) have seen great success raising significant finance for a huge range of diverse projects.

With blockchain there is no paperwork or intermediary. Transactions typically rely on smart contracts (a form of computer code executed on the blockchain). This technology can be deployed to eliminate lead times for currently cumbersome processes such as supplier switching, which today typically takes between 17 to 21 days to conclude. Blockchain as an end-to-end digital service can also handle 20 times the volume of switches currently occurring.

Blockchain could usefully be used as a definitive, industry-wide, registration service for supply-point meters, generating assets and their characteristics. A reliable and transparent record system is seen as essential to the efficient delivery of decentralised networks. Recording meter, generating plant and network equipment details and associated characteristics and understanding this in the context of historic consumption information would significantly assist the balancing process. Supplementing this with excess capacity available from electric vehicles when not in use could form the basis of a balanced, P2P electricity trading ecosystem.

Is it all good news then?

Blockchain undoubtedly has transformative potential. The technology has the power to disrupt the structure of retail energy markets which may or may not be desirable. Just some of the issues that would need to be addressed for its deployment include: charging methodologies for use of system; the allocation of imbalance charges for mismatches between the amount of electricity sold and purchased and the amount produced and consumed, rewriting of the network codes, whether such systems at national scale require a supplier of last resort, and a potential seismic industry shift in consumer service deliver models required to support consumers in a decentralised marketplace. In addition, the lack of an intermediary could be seen as a key risk. Central oversight is a key element in today’s electricity trading markets as it protects customers and manages risk. Privacy requirements, licensing, contracting mechanisms and market access rules are all further potential barriers to immediate adoption.

Whilst there are considerable challenges, the litmus test for the technology will be whether customers will culturally accept the technology and will want the offerings it can provide.

6. Residents of Park Slope and the adjacent neighbourhoods of Gowanus and Boerum Hill who founded the Brooklyn Microgrid

11. Jo-Jo Hubbard “Blockchain is changing finance forever: It will do the same to flawed energy markets”, City A.M. 16 March 2017.