Britain's EVs emit on average just one quarter of the CO2 of conventional petrol and diesel cars, according to research carried out by Imperial College London on behalf of Drax Electric Insights. 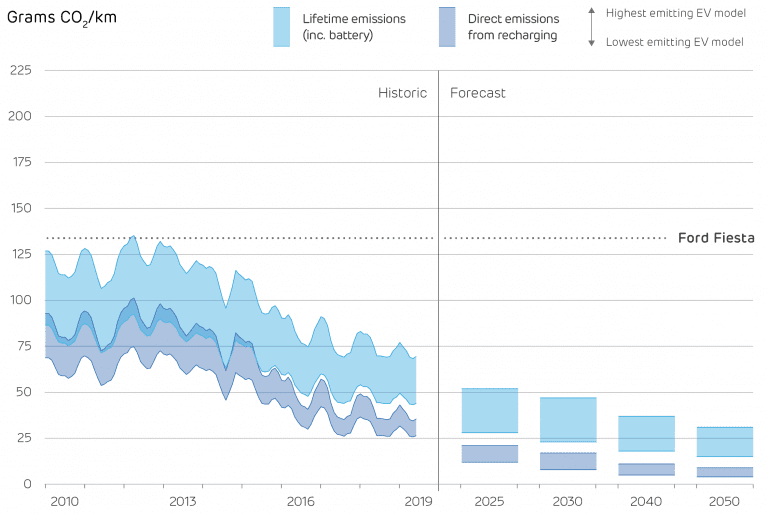 The research also showed that if the carbon emitted in making their battery is included, the CO2 emissions are half those of a conventional vehicle.

The research found that the increasing decarbonisation of our electricity supply linked to the 2050 net-zero carbon target is enabling EVs to become even more environmentally friendly. Britain’s EVs bought today could be emitting just a tenth of the CO2 from a petrol car in five years’ time.

Electricity generation is decarbonising faster in Britain than anywhere else in the world. Wind, solar, biomass, and hydro supplied 55% of electricity demand on 30 June, breaking last year’s record of 48% according to the report.

Dr Iain Staffell of Imperial College London said: “EVs have real potential to reduce our carbon footprint and help meet our net-zero carbon ambitions – despite some speculation about how clean they really are.

“An electric vehicle in the UK simply cannot be more polluting than its petrol or diesel equivalent – even when taking into account the upfront ‘carbon cost’ of manufacturing their batteries. The carbon content of Britain’s electricity has halved in recent years and keeps on falling, whereas conventional engine vehicles have very limited scope to reduce emissions over their lifetime.

“Any EV bought today could be emitting just a tenth of what a petrol car would in as little as five years’ time, as the electricity it uses to charge comes from an increasingly low-carbon mix.”

There are now well over 200,000 on Britain’s roads, and this number is growing by 30% per year. One in 40 cars sold in Britain is now electric, around a third of which are pure battery models, and two thirds are plug-in hybrid.

Britain’s electric vehicle fleet is expected to expand ten-fold over the next five to ten years according to National Grid’s latest Future Energy Scenarios report.

Paul Sheffield, managing director of Drax’s Customer supply businesses Haven Power and Opus Energy, said: “The electrification of transport is going to be vital if we are to address the climate crisis. We’ve seen first-hand how complex it can be for businesses to switch their fleet vehicles to EVs and have developed a new service to help make the switch easier for them.

“Supplying renewable electricity to businesses is one step towards helping them to be more sustainable – enabling them to decarbonise other aspects of their operations like transportation, will mean they can play a fuller role in the transition to a zero carbon future.”