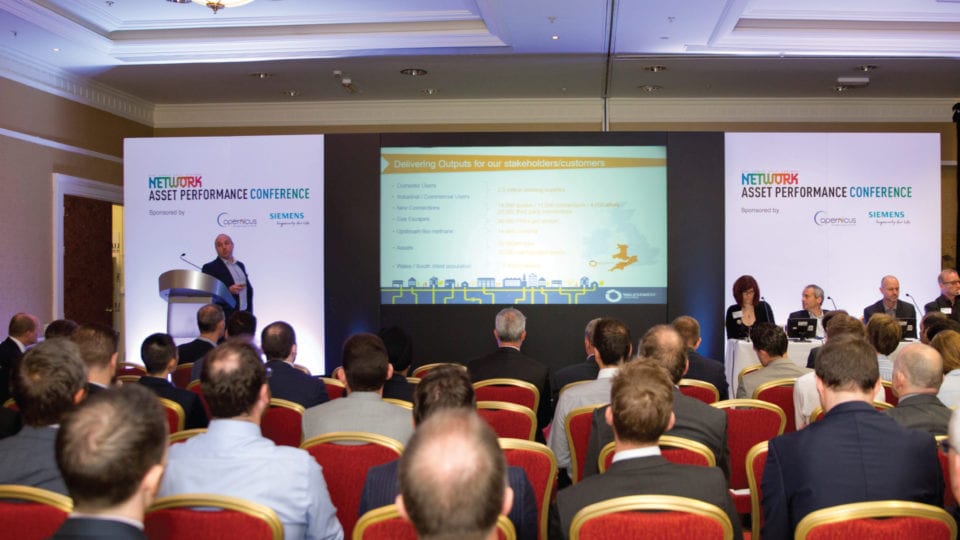 The fact the UK has such a safe and reliable energy system is testament to the physical assets that underpin the energy infrastructure of the gas and electricity networks. The vast majority is several decades old, with a life expectancy of at least the same again. Despite a sound track record, it is no longer enough to maintain the status quo with a lick of paint or a like-for-like replacement.

Instead assets that were built in a bygone era must meet the complex demand matrix of cutting edge technology and increasing customer demands, a continuing programme of repair and replacement, and a rapidly changing climate, set in the framework of a constant pursuit of value for money. Delegates gathered in Birmingham at Network’s inaugural asset performance conference last month, sponsored by Siemens and Copernicus, to hear from a diverse mix of experts from across the industry, but their views on the trajectory towards improved asset performance are consistent; innovation and data are key.

“We spend a lot of money replacing iron mains each year, its mandated by the HSE, it follows some quite significant explosions and some awful deaths which triggered this programme, but it’s quite an emotional reason for a programme. When you monetise the risk for it, the carbon and environmental impact by far dwarfs anything else that would drive this programme. This is really good for us, because it allows us to demonstrate why we are spending money on iron mains, its more than just the very very slight chance of explosion and death, there are much wider benefits which customers can see.”

Big-name projects such as My Electric Avenue and Real-Time Networks are evidence of the innovation work being undertaken by networks through the funding support of the network innovation competition and network innovation allowance, but the technologies explored in these projects are the technologies of tomorrow rather than today. While it is important that networks prepare themselves for such a future, innovation is done at the cost of consumers and a real impact on business as usual activity is often used as the marker of success.

Ofgem’s senior technical adviser Gurpal Singh questioned whether the balance between the long-term vision and immediate gains is right. Asset management is the focus of many of the smaller and cheaper NIA projects, but as asset management forms up to 40% of the price control Ofgem would like to see more done in the bigger projects to allow this funding to be decreased in future price controls.

“Siemens are a provider to a lot of industries, such as manufacturing. Comparing the methodologies they apply in other sectors, energy is not as advanced. This is despite the UK energy network being the second most complex infrastructure built in the world after the internet, but we are still behind in producing this data. It’s all due to the lifespan of the assets.

Projects that do have an asset management theme, such as National Grid’s Project GRAID, are focussed on improving the visibility of asset condition on the network. The project is endeavouring to develop a remotely controlled robot which will be able to visually inspect buried high pressure transmission pipelines and collect other data on asset health.

As one speaker remarked; energy networks have never been shy about collecting data. “Sometimes we do it for fun, from what I can see” he quipped. But this data needs to have a purpose; it needs to enlighten and challenge existing practices, and for that networks will need to innovate internally.

One such example is by Wales and West Utilities, in collaboration with the other GDNs, in determining where to target investment. Data is used to assess the likelihood of a consequence happening, and that consequence is given a financial value. In this way risk can be monetised and should result in a more accurate financial settlement in the next price control.

This is obviously a step forward, but has had unexpected consequences. The level of detail being explored has exposed some myths about what investment is actually achieving. WWU’s analysis has revealed that death – the reason behind the acceleration of the replacement programme which will cost each GDN between £2-3 billion during this price control – is only the sixth biggest driver of the iron mains replacement programme. Instead the benefit is overwhelmingly environmental.

WWU’s asset strategy and performance manager Ian Dunstan said intervention plans in the future will likely be driven by consequence of action, or inaction rather than the health of the asset itself. But asset health will obviously still have an impact. SGN is utilising data to prioritise projects which will have the biggest impact on the assets deemed to pose the greatest risk to improve the efficiency of its programme.

The common methodology for determining asset health being worked on within both the electricity and gas networks is forcing network operators to question why they are collecting data. Determining risk is a data hungry activity but it is difficult to sell the business case for its collection. Networks must also look beyond their own activity for outside sources of data they can use to their advantage, such as the freely available climate change data available from European project Copernicus.

“I think the penny only dropped relatively late that data is not only an input, but data itself should be subject to that process. The same disciplines that you put into how do I manage and monitor my asset needs to be applied to the data. What we are starting to work out is to think about the longevity of data and the validity of data. There is a huge danger in using out of date data.”

Electricity North West’s head of asset management Jonathan Booth warned that there is “huge danger in using out of date data”. He said networks have only just woken up to the fact that data is an asset in itself that needs as much maintenance as the pipes and wires. But data is not the only new asset networks must contend with. The rise of distributed generation has brought about new commercial contracts, and these must also be managed correctly to ensure they perform to their full potential. Here is an area where networks must make use of innovation funding to arm themselves with knowledge on these new assets.

“In many circumstances, not just in this sector, our predictions for the future are based on the past and this is not something that is sustainable in a world where the climate is changing so rapidly. So one of the things I think we could potentially see is data analytics taking advantage of the new stream of data that is coming from global sources.”

Data will have one final impact on how assets performance will be enhanced. The sheer volume of data points necessitates the use of software that will render engineers the “thick part of the equation”. This is already being demonstrated by software such as Enel’s smart grid technology in Milan. Who should undertake analysis saw for the first time a diversion of viewpoints. Some, understandably wish to keep hold of their new data asset, but others do not think network operators are currently the right organisations to get the best value out of that data.