The future of gas

Tony Nixon, head of gas transmission, regulation, National Grid talks to Network editor Alec Peachey about a range of subjects including decarbonisation, taking a whole system approach and the future role of gas. 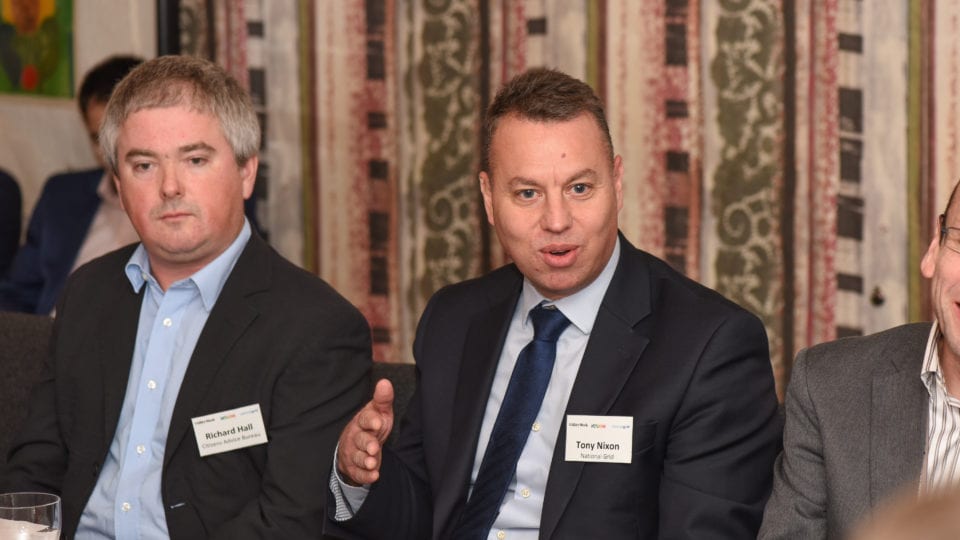 At a recent National Grid roundtable discussion held in association with Network entitled ‘Solving future system challenges now’, the first topic of discussion was what exactly is meant by a whole system.

Attendees debated a range of topics including the requirement to solve system challenges on a whole system basis.

Reflecting on the event, Nixon (pictured) said: “It’s about being clear what we’re talking about when using the whole systems banner. Once you’re off on that you can have a proper discussion about what the networks can either consider or should be considering in their plans.

“One of the things to point out is it’s about how we deal with uncertainty. We might not have all the answers. We’re not the only party here. I think the group recognised that not any single person has an answer, but what role do each of us play in that. If there are uncertainties, how are we going to deal with those uncertainties?”

During our chat, Nixon highlighted the importance of continuing to invest in maintaining the capabilities of the network, adding: “It’s about making sure we test those capabilities and what customers want from the networks in the short and long term. At National Grid we do long term testing and future energy scenarios that have a whole range of possible outcomes. It’s ensuring we test our plans against those. That’s what we’ll be doing for our next price control as well.”

The importance of gas came through strongly during the discussion including its role in decarbonising the energy sector.

“I think it is good that people are thinking about the gas networks and how they contribute,” continued Nixon. “Because at peak times they provide four fifths of the UK’s energy supply. It’s important that we don’t forget gas. We do need to move towards a decarbonised energy supply. And it’s about how the networks can contribute to that. I think highlighting the challenge and coming up with possible ways that the gas networks can contribute to that long-term future is important. So, what are the alternatives and making sure we’re very clear what the role of gas can be.”

According to Nixon, renewable gases including hydrogen and biomethane can both play a role in this. But when considering these alternatives Nixon cautions that the industry must be mindful of fuel poverty.

“At the moment gas is the lowest cost form of heating people’s homes,” he remarked. “We’ve got to be careful that we have a solution that can mimic that in the long term. We need to ensure that we don’t add any growing concern to fuel poverty and people that cannot afford to heat their own homes.”

Back in 2017 National Grid announced that over 9,000 homes in London would benefit from the first payments from its new £150 million Warm Homes Fund.

The fund was set up using part of the proceeds from the sale of the company’s majority stake in its gas distribution business. The fund is managed by Affordable Warmth Solutions, a Community Interest Company (CIC) which was established by National Grid in 2008 to fight fuel poverty.

“From our network point of view whilst gas is the lowest cost solution, we’re ensuring we deliver the capabilities that our customers want at the right price,” states Nixon. “We’ll continue to do that and test that we are delivering what our customers want in the short term, but also testing it against the future outcomes.”

How important a role will gas play in creating a decarbonised world and in developing the whole systems approach?

“We’ve been working with Imperial College London. If we talk about the power sector, we’ve been doing some work to understand how the UK generates its power.

“Today (8 January 2019) gas generation for electricity is currently at 41.9% of total generation. When the sun isn’t shining and the wind’s not blowing what backs up that intermittent source of energy? Imperial College have shown that the lowest cost option for the UK is to have the gas transmission system and gas-powered power stations as back up. It’s not a case of using it every day and the carbon emissions reflecting that. It’s to have it there as a back-up. That is a lower cost option than any other technology at present.”

With this in mind, should gas and electricity operators be working more closely together?

“I think the above example is the prime one really,” continues Nixon.” As people move towards using electricity differently in terms of how they charge their cars or power their homes or businesses it will lead to different profiles of how electricity is needed throughout the day and the year. It’s making sure that our network and the electricity network can meet those peak demands as and when needed. That’s why we use the future energy scenarios to look across both electricity and gas to see how they complement each other.”

One thing that came out of the recent roundtable session was the importance of putting in the right options for the future when building new homes.

Nixon highlights a Greek proverb when discussing this. “A society grows great when old men plant trees whose shade they know they shall never sit in,” he comments.

“There was a lot of talk about putting in electricity and gas supplies, but they’re all based on today’s need. Should we be thinking about the optionality for future needs?

“Should we be putting things in now that current customers will not see the benefit of, but longer term will stand us in good stead as we decarbonise our energy system.”

As part of its stakeholder priorities National Grid has outlined three key customer and consumer priorities across its gas business.

The industrial and domestic consumer priorities are as follows:

“It has never been more important to ensure that our plans are being driven by what our customers and consumers want. As part of our engagement in getting ready for the next price control we’ve been increasing our engagement to really understand what people want,” remarked Nixon.

“The third one, we weren’t expecting. Consumers are recognising that there is a need to reduce the carbon in our energy mix. However, what they don’t want to see is more excavations of the road, more disruption to transport or major disruption to where they live by changing one technology out for another.

“It’s about how do we as an industry come up with the right solutions that give a low carbon alternative at a cost they’re willing to pay for. We have to understand what we can do to help that.

“A lot of that comes down to how do we decarbonise heat. We have a role to play in helping to understand what the costs are. We can look at different vectors. For heat do we consider a hydrogen network versus an all electrification scenario? What would it mean for our network if it was hydrogen? What would the cost be of keeping the network and utilising it to support a hydrogen economy? Or what would the cost be if it was an electrification of heat scenario? What role would the gas transmission system play in providing the rest of industry with power?”

When looking at alternatives to gas Nixon says that trials will be the key to providing evidence to government as to what is the right way forward.

“It’s not always easy to compare us to other countries because of how many homes are heated by gas in the first place,” he says. “We’ve got a very different energy mix to a lot of other countries.

“There are trials over the acceptability of hydrogen. There are even trials with heat pumps. Whether they’re dual gas and electric or just electric. Both of those need to be understood around how they work in people’s homes and work in a UK environment. This will determine what that would mean and the impact of that on the whole energy system. The trials are the evidence point and are needed to inform the policy makers of what is the right mix or package of items that you roll out to consumers. We’re hoping that the government adopts an approach of making sure the trials deliver results by mid 2020s. We can then come up with the right programme of works to decarbonise from there.”

As our conversation draws to a close I ask Nixon if there should be a cross sector incentive offered by Ofgem to encourage a whole systems approach.

“I think it’s about ensuring that the right regulatory framework is put in place. There’s a fantastic opportunity at the moment. Ofgem have launched their consultation for the gas and electricity transmission and distribution networks and have mentioned whole systems. So, if there are things that need to be changed to facilitate a better view on whole systems then now is the opportunity for all parties to respond to that and make sure the right framework is in place so that networks can get on and deliver against it. I think the opportunity is there and that will continue into the next electricity distribution price control.”

Ultimately Nixon believes that the future for gas is bright.

He said: “We’ve got a strong belief that given the need for heat we see a way into the 2040s that there’s a role for our network to continue to deliver power, heat and resource to industry. Through that period things will change and we’re making sure that we put in the right mechanisms, that as they change, we can change with it. We are looking to see how networks can help in decarbonising heat whilst ensuring we look after those in fuel poverty. We will be engaging on our role in the energy system and how we can help decarbonise heat as we go forward.”

Look out for a write up in Network and Utility Week highlighting the themes discussed at the recent roundtable discussion: ‘Solving future system challenges now’.