A high-efficiency waste gasification demonstrator project funded by the Energy Technologies Institute is producing electricity for the grid, but its sponsoring organisation was wound up at the end of December. Before closing day, ETI project manager Paul Winstanley told Elaine Knutt about what the ETI/Kew Technology Sustainable Energy Centre has achieved, and possible future milestones. 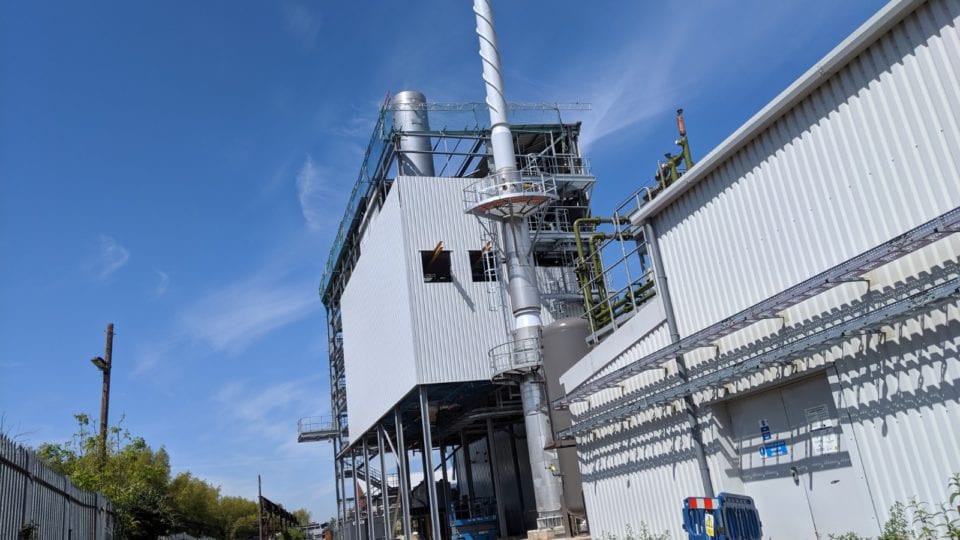 In 2014, the Energy Technologies Institute (ETI) embarked on a project to advance practice and knowledge on waste gasification, the process where household waste is heated to high temperatures with controlled amounts of oxygen and steam to produce “synthesis” gas, or syngas. After a competition in which three consortia were invited to develop their ideas, the ETI progressed with a patented process from a start-up called Kew Technology – the company says that its process is more versatile and less energy-hungry than other forms of waste gasification.

Built on an industrial site in Wednesbury, in the west Midlands, with a £8m investment from the ETI, the demonstrator plant is designed to convert around 14,000 tonnes per year of locally sourced waste, and provide 1.8 MW of electrical power to the grid.

Based on a scalable, modular design, it converts post-recycling refuse-derived fuel (RDF) into syngas that’s used to power a modified high-efficiency gas turbine to generate electricity. At the same time, the plant can pump cogenerated heat to local users – such as a nearby swimming pool – although that option has not yet been tested.

In a different operating mode, however, the unrefined syngas – containing hydrogen, carbon dioxide and carbon monoxide – can be further purified into hydrogen and sold to industrial customers. However, around 20% per cent of the syngas is expected to be sold in its unrefined state to other companies developing low-emission fuel products and solutions, such as liquid methanol used as a transport fuel, or producing methane as a form of energy storage or for injection into the gas grid.

“The plant is designed to supply slipstreams of syngas for other people to experiment on,” notes Paul Winstanley, project manager at the ETI.

The project was also designed to commercialise smaller-scale waste gasification plants, including making them easier to construct, finance, and offering a greater degree of reassurance on the technical risks and health, safety and environmental concerns.

Largely, the Wednesburyproject has dealt with these questions positively. “A lot of people are very interested, the site is starting to prove the concepts we’ve talked about,” says Winstanley. The project’s technical success has also been established: the first syngas was produced in April 2019, while in September it contributed the first generation to the grid (while the gas turbine was still in the commissioning phase).

But that milestone was reached just as the ETI – formed in 2007 as a public-private partnership to accelerate the development of low carbon technologies – reached the end of its lifespan. But while the ETI is no longer around, Winstanley will continue to work with the Wednesbury team as an adviser and consultant.

Why is the technology so different?
The system for cleaning the syngas cleaning is unique and patent pending. Cleaning the gas before you use it takes out the tar and other contaminants, and makes it more suitable for electricity generation and other applications.

How do the economics stack up?
The scale is quite small for a commercial plant, so that gives it a better chance to be self-supporting. There are multiple revenue streams – combined heat and power, electricity to the grid, purified gases. Other, larger plants found that couldn’t keep up efficiencies at smaller scales. We have an overall efficiency rate of 30 per cent, and plenty of opportunity to improve that over time. Meanwhile, electricity generation via the gas engine is already at 41% efficiency, up from 36%.

What was the idea behind the project?
The Sustainable Energy Centre was conceived as a research and development site that nevertheless makes enough money to cover the equity investment costs, so it’s not just a “demonstrator”. In terms of the payback period, a plant should be able to make £2m a year, so if the overall costs is £10m for a 2 MW capacity facility, that’s a 5 year payback period. We estimate that the plant would have at least a 25 year lifespan.

These are all ball park numbers, and there are also the site costs, planning and development costs, and operating costs on top. But the capital costs would be repaid in five years.

Other demonstrators, such as Cadent’s BioSNG trial in Swindon [where the consortium behind a commercial version went into administration in December 2018] and the ECN project in the Netherlands were successful concept demonstrators. Their permits had restrictions however, so while the technical concept can be demonstrated, these plants have struggled to prove the process works well over any signification time frame. These demonstrators fail to cover their operating costs with revenue and tend to be operated under environment agency exemption permits, limiting feedstock volumes and time durations.

What would potential customers be buying?
Kew Technology’s vision is to productise this and sell modular units built in a factory, then transport them to the site, offering cost savings and health and safety advantages.

The goal is to reach an installed cost of less than £5m per MW of generating capacity, and to sell it to customers as a turn-key package. It’s designed to fit into 10 to twelve containers, the type you see on HGVs, measuring 40 x 8 x 8 feet. Once it is delivered to site, it is a question of “plug and play”. If you had all twelve, you could run all the processes offered, or you choose fewer but adapt over time.

For instance, you could have the gas engine and hybrid fuel plant, so you could supply electricity and low emission methanol fuel to HGVs, with additives.  Or you could use a methanisation process to offer energy storage and grid injection. These possibilities are perhaps two to four years away.

Who is interested in the concept?
At the moment the energy from waste market is pretty dominated up by the big three players – BIFFA, Sita and Veolia [which operate Energy Recovery Facilities selling steam turbine-generated power to the grid]. The big three also export RDF to partner sites elsewhere in Europe, as there aren’t enough processing facilities here, so this concept could add capacity at a reasonable cost.

So the idea is to engage with local authorities, and to offer plants as a turn-key package wrapped up with warranties. Local authorities are often interested in district heating, where a facility like this might be one of multiple providers you would need.

What about the cost of raw materials?
It depends on where in the country you are – in the Midlands, RDF feedstock might cost £50 to £100 a tonne, in Hull and Humberside area, it might be just £25 to £60, so the difference in costs can make a big impact and the market is uneven.

There’s also a lot of interest from overseas, such as South Africa and Asia – in other words developing countries that typically have high electricity costs, perhaps 25 p per kWh. However, in developing countries, you’d expect to have to pay to get the feedstock, because there is no organised supply chain when waste is simply being dumped, and you’d need to set that up.

What about the impact of the site and chimneys in an urban environment?
It runs with ultra-low emissions, making it ideal for integration into wider sites. The site at Wednesbury is 50% bigger than it needs to be, as the original plan changed. We have a 30m chimney flue, but technically there is no need for it to be more than 12m, although you may want it to higher if air quality is a concern, for instance if it’s very close to housing.

Did you have any technical difficulties?
To connect to the local grid we were hit with a bill of £200,000 to add capacity at the substation. Then we had to synchronise our power to the grid, and on the day we connected the power for the first time we had to change the settings or we would have tripped the site. We had to shut down temporarily while we found a solution, but luckily we had the right people in the room to find a solution.

What about hydrogen?
At the moment the outputs are electricity and heat, but from the syngas we can produce pure hydrogen, liquid fuels and methane. The syngas is a building block for other things.

Kew has demonstrated it can produce hydrogen with CO2 sequestration. There is a lot of interest in hydrogen and, on cost, Kew’s technology has the potential to compete with other providers; it could be exciting.

However, the cost rises if you want pure hydrogen. Some customers want 99.999% purity, others don’t need “five 9s”, as 99.5% might be enough. Kew has done a desk top study for BEIS on the market potential.