Demand for renewable biomethane has almost tripled in a year at a compressed natural gas (CNG) refuelling station backed by gas network Cadent and operated by CNG Fuels. 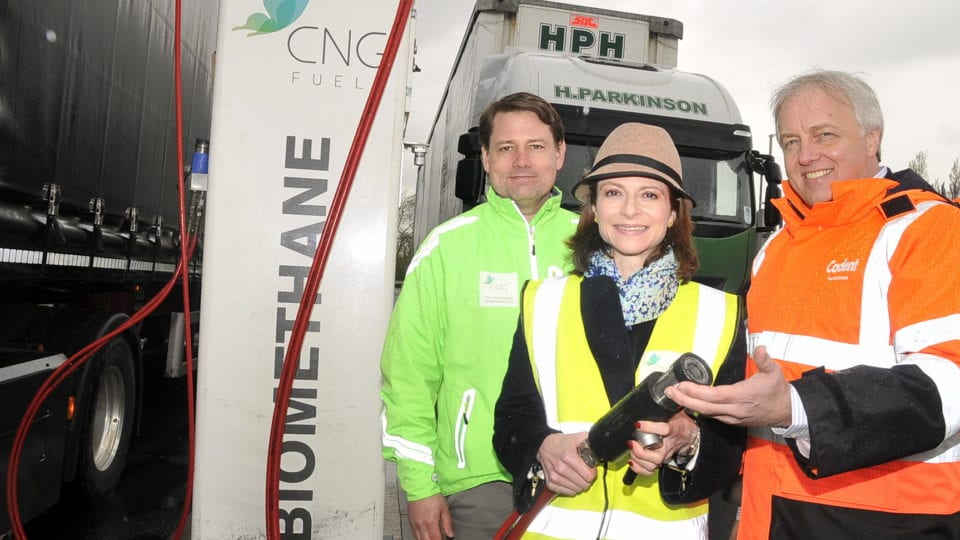 A growing number of big retail and logistics firms like Waitrose, Asda, DHL, Argos and Preston-based H Parkinson Haulage are now using the site off the M6 at Leyland. Latest data shows the volume of gas dispensed at the site in March this year was 170% higher than in March 2017.

Seema Kennedy MP, Parliamentary Private Secretary to the Prime Minister, visited the site in her South Ribble constituency to see how it is helping UK hauliers to slash their carbon emissions and save money.

“I’ve been really impressed,” she said. “We’ve got huge wagons fuelling up with 100% renewable gas. This is really exciting, it is the decarbonised future that we’re all looking for.”

Last year, a report revealed that HGVs using the station emit up to 84% less carbon than diesel equivalents, as well as far less air-polluting nitrogen oxides. The project ended the year on a high by winning a top industry environmental award.

Operational since 2016, compressed natural gas (CNG) dispensed at the site is 30 to 45% cheaper than diesel. The gas comes directly from a high-pressure pipeline, which makes it a UK-first and contributes to its heavily-reduced carbon footprint. It is certified as renewable and sustainable, as CNG Fuels pays for an equivalent amount of biomethane made from food waste to enter the network.

David Jones, transport strategy manager at Cadent, said: “We were delighted to host Seema Kennedy and explain how this technology can support Government targets for clean growth and significantly help reduce air pollution in our towns and cities.

“This site is attracting lots of interest. Its impressive results prove that gas can be the fuel of choice for HGVs and have a big impact in reducing UK carbon emissions.”

Philip Fjeld, CEO of CNG Fuels, said: “Renewable biomethane is the most cost-effective and lowest-carbon alternative to diesel for HGVs. Following the success of our first site at Leyland, we are expanding our refuelling infrastructure nationwide to help fleet operators save money, cut carbon and clean up our air.”