At DNV GL’s Spadeadam site, gas engineers can feel the full force of the kind of gas disaster they hope they’ll never face. 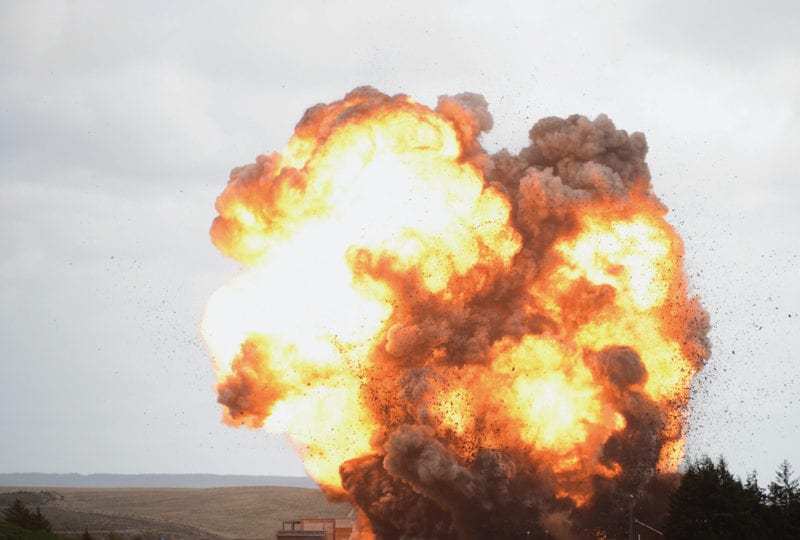 Gas transmission and distribution in the UK have enviable safety records. But those involved in the sector are only too aware of the dangers the fuel poses. A safety executive in a gas distribution company doing his job right will be a “nervous squirrel”, seeking out the unknowns and always on their toes about the dangers the transportation of gas poses.

But do safety executives truly understand the consequences of a major safety failure when such incidents can only be experienced through video recordings and theory?

Examples of such events can be found abroad, such as in the case of San Bruno in September 2010. An electrical failure at the natural gas pipe terminal triggered an uncommanded surge in pressure through a 30-inch pipeline. The fault also knocked out sensors, leaving engineers blind to the critical nature of the incident until a collection of pipe sections under a housing estate – that were badly welded together – failed.

At just after 6.10 in the evening a huge fireball ripped into the air. The explosion and resulting fire killed eight people and injured 58 others, destroying 38 homes and leaving 70 damaged.

The statistics from that day reveal the magnitude of such an event; how devastating the impact would be. But until they feel the heat on their cheeks and the force of such an explosion, or see a two-inch thick metal gas pipe split down the middle and the edge frilled like a pie crust, safety personnel cannot truly understand what they are dealing with.

That’s why there are facilities such as Spadeadam. Network visited the site in Cumbria, 30 miles from Carlisle, to see where gas distribution company staff can experience the types of explosions they work every day to avoid.

The site was originally owned by British Gas Research and Development, but DNV GL now operates the facility, which shares its location with a military base that spans 9,600 acres of forest and mire on the border between Cumbria and Northumberland. This remoteness is key, allowing the company to stage the kind of explosions that can’t be done with neighbours close by.

Spadeadam can demonstrate a variety of situations, such as gas leaks, a third party hit on the mains or a leak with an ignition source. The largest tests take up to six months to construct, requiring as much work as a real-life scenario. Transmission pipeline costs about £1,500 a metre, so they represent a significant investment. However, the experience such a test can provide for gas engineers who might one day be tasked with attending the aftermath of an incident is invaluable. GDNs say the biggest safety difficulty they face is the opportunity to build up competence.

Antony Green, vice-president for utilities and infrastructure at DNV GL says: “The corporate memory is somewhat lacking because the people who have dealt with these incidents in the past are long gone, so what is the risk of a failure on a gas main? We can actually demonstrate that at Spadeadam.”

Network witnessed several small explosions, including the ignition of 6kg of propane gas in an 80m3 volume, ignited at one end with a spark generator. The force is incredible, and truly does need to be felt for the consequences of such an event to be understood. Such an explosion is at the small end of the scale; the force from the kind of explosion that can send a 13-tonne section of pipe flying is unimaginable, and frankly frightening.

To prevent this dangerous industry complacency, Spadeadam has invested £3 million in a new training centre and demonstration area and is developing a range of courses aimed specifically at GDNs and National Grid.

“This is a major investment in the site, recognising that there is a real need in the industry to push forward in this area. It can be used for hazard awareness, industry conferences and research.”

Alongside training, the team at Spadeadam are regularly called in to perform independent investigations at incidents for GDNs, such as the fire at Holborn in London. In that case the affected gas pipeline took a full two days to cool. A lot of the explosion research that underpins the fundamentals of incident investigation was also developed at Spadeadam.

“That’s why we are unique,” says Green, “a lot of people can model things, but we can model and test the real world impact of that – and we can recalibrate our models to match.”

Spadeadam also has a long history of being the place where GDNs test their innovations before they are used on the network. The robotics in National Grid’s Project Graid (see right) are due to be tested here. The site’s remoteness also allows for complete confidentiality with these projects.

In the future Spadeadam may also have a role in testing carbon capture and storage technology, necessary for the decarbonisation of gas generation, because it is one of the few places where gas release work can be performed.