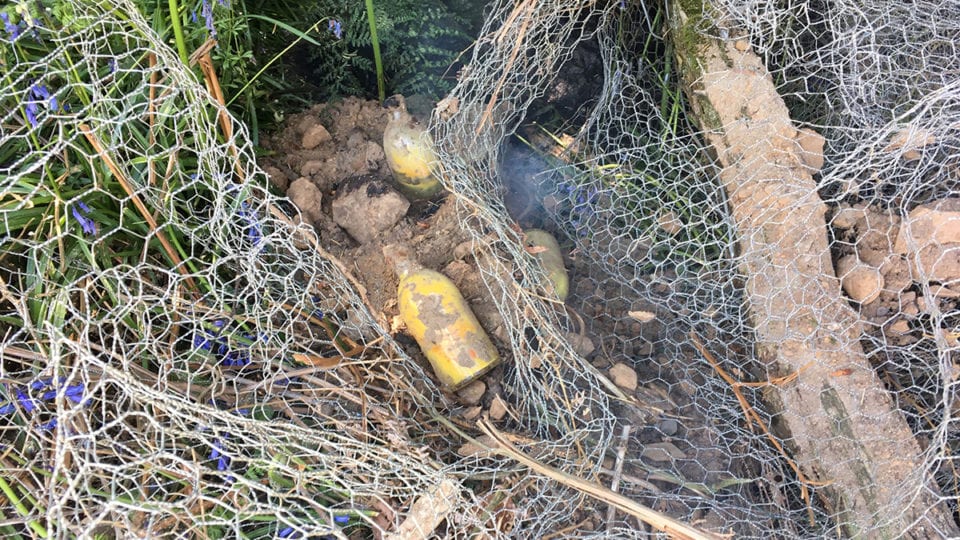 On finding the collection of glass bottled explosives the team promptly called in the bomb squad who put an exclusion zone in place at the site of the find near Tongland Dam. A controlled explosion was carried out.

Three properties locally were temporarily evacuated and for safety reasons, SPEN turned off local power supply to a further 60 homes for a short period to ensure the explosion could be carried out without impacting the power network.

Supplies were rerouted to keep any disruption to a minimum and full power was restored in under an hour.

Duncan Muir, team leader for SPEN based Dumfries, was in charge of the team on the ground. He said: “The lads thought it was old milk at first when they saw the yellowed glass bottles, then one started slowly smoking and that’s when our health and safety training kicked in. We covered them back over with soil and retreated to a safe distance to call the fire brigade and the Ministry of Defence.

“The bomb squad were soon on site and knew exactly what to do. A 100m exclusion zone was put in place and we played our part in turning off the power supply in the immediate area to allow for a safe controlled explosion to be carried out.

“I’ve worked for SP Energy Networks for almost 30 years and have never come across anything like this before. We’re carrying out a lot of work in the area to future-proof the network, upgrading transformers and installing new earth wire to improve the security of supply for our customers – all to support the country’s decarbonisation plans in the race to net zero. We certainly didn’t expect to come across something like this. It’s a first for me… and hopefully a last too.”

The Home Guard were tasked with defending the five thousand miles of Britain’s coastline in the event of an invasion by Germany. A rag-tag volunteer militia, resources were scarce and they often had make-do uniforms and weaponry.

The grenades unearthed by the SPEN team were commonly known as the “SIP” (self-igniting phosphorus) grenade and were primarily to be used as an anti-tank weapon. The Home Guard hid caches of these grenades during the war for use in the event of an invasion. Not all locations were officially recorded and some caches were lost.