Network visited the Power Networks Demonstration Centre to find out about recent technologies to pass through its accelerated testing regimes. 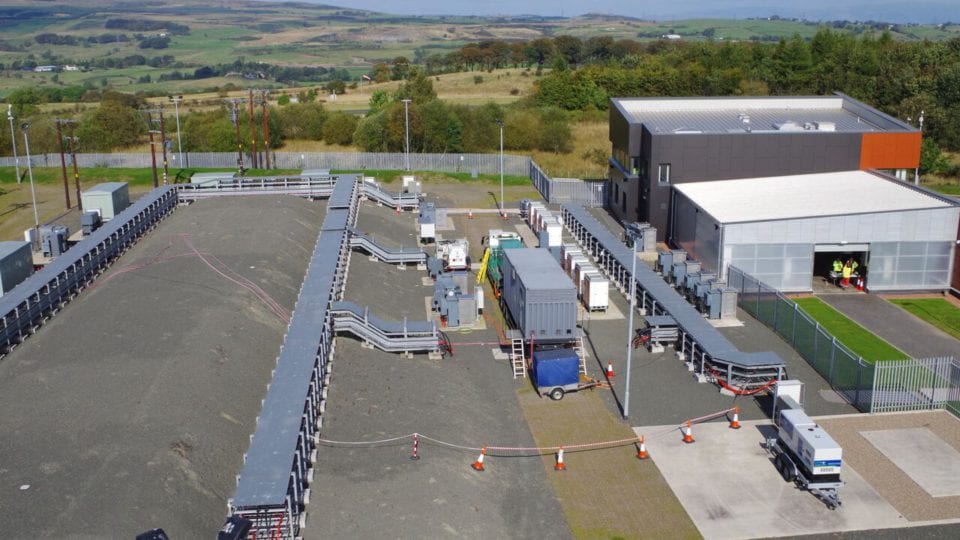 The Power Networks Demonstrations Centre (PNDC), located near Glasgow, is a not for profit facility which aims to accelerate time to market for new power network technologies. It does this through a process of intensive failure testing on its unique private network. The centre has been open almost two years and here we profile some key technologies to pass muster and make the leap to real network application:

PNDC trialled two hybrid generator technologies from two technology developers both of which combined a diesel engine + alternator with a battery pack. The batteries were based on different chemistries however (one was a 300 kVA unit based on sealed gel lead-acid, the other a 30 kVA unit based on Li-ion).

These technologies aimed to offer fuel efficiency, lower carbon intensity and better capacity utilisation compared to conventional diesel generators which are used by DNOs during emergencies or planned power outages.

While the larger technology did not successfully complete testing, the smaller scale technology successfully identified and resolved issues and eventually proved resilient and capable of offering cost benefits to networks.

It is understood that a number of unity of this successful technology have now been purchased by PNDC member network.

PNDC carried out accelerated testing of the complete system (control functionality + fuel saving + harmonics) over 24 loading cycles to prove that the system was ready for deployment by the electricity distribution network operator.

Any improvements required, in terms of grid operation standards, were shared with the clients and this joint development ensured it was ready for deployment

Fault passage indicators (FPIs) have been used for a number of years on 11KV networks as a cost effective way to indicate the passage of fault current. However, their reliability has historically been patchy.

Over the course of the last two years, following a number of strides in embedded technologies and wireless communications for FPIs, PNDC has been involved in approximately five separate FPI projects in which they impose a high volume and variety of faults onto its network to test technology capability and resilience.

Used a complementary set of network and laboratory simulation tests to reflect realistic operating conditions for FPI technologies. This included heavy use of the PNDC high voltage fault thrower.

It conducted thorough evaluation of FPI performance under these conditions. This performance data enables improved understanding of FPI reliability and how indications should be integrated into network automation and post-fault recovery schemes.

A number of collaborative partners including bus manufacturing Alexander Dennis, BAE Systems, Axeon Power and SSE came to PNDC to test the viability of the charging technology for a low emissions bus. The hybrid vehicle couples a diesel engine with and induction charged battery.

Successful testing led to a demonstration project being announced by Transport for London using and upgraded and extended range of diesel hybrid double decker busses from Alexander Dennis. This trial is due to commence spring 2016. A broader outcome for network companies however is improved understanding of the effects of harmonics from power control systems on low voltage network infrastructure.

Installed a custom-built induction charging facility which was to evaluate; the viability of installing induction plates in standard bus bays; the reliability of GPS positioning systems to accurately park the bus over the induction charging plate; the efficiency of the charge and discharge rate of the battery; the potential impact of harmonic interruptions from the charging system on the low voltage network

PNCC engaged in a UK testing project for a technology from the USA which had been identified during a Low Carbon Innovation Fund initiative. Adding by adding sophisticated control parameters to standard tap changers, this technology offers a smarter solution to common network challenges around sustaining and boosting voltage on remote parts of the network.

Unlike conventional Automatic Voltage Regulator offerings, this technology operates using measure of current rather than voltage. They can also be configured in delta formation rather than in-line, resulting in cost benefits for networks.

The successful testing of this US technology has improved understanding of its potential for use in the UK. An independent review of PNDC’s project report has also identified that the findings should be used to inform training of networks’ technical and operations staff.

These regulators rated at 11 kV, 220 kVA were connected to PNDC’s test network in closed-delta configuration. A range of settings were tested under simulated scenarios to produce a comprehensive set of use case data

This project aimed to release capacity across the UK’s existing networks and defer the need for investment in reinforcement by synchronising and balancing across three phase connections or at points of interconnection between low voltage feeders. The capacity released through this approach should help networks to connect more sources of renewable power or low carbon technologies like electric vehicles.

The Soft Open Point (SOP) technology applies power electronics to balance the load across the points of imbalance, achieving better utilisation of capacity.

During testing at PNDC the SOP was connected at the open point of three separate low voltage feeders connected to different 11kV/415V substations on PNDC’s private network.   the SOP technology was deployed on a live network as a prototype trial in late 2015.