Cornwall Council has committed nearly £10m of its remaining EU grant funding to coax a project to supply deep geothermal heat and power to the Eden Project visitor attraction and education centre over the starting line. 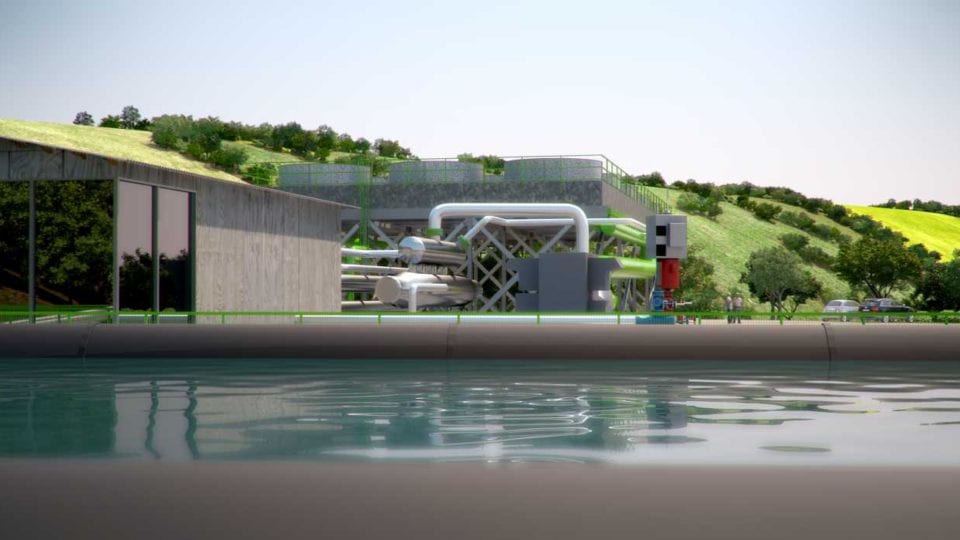 The investment means that the Eden Project and its delivery partner, EGS Energy, can start drilling their first well on Eden’s site next summer, after working for a decade to get the project off drawing board.

In total, the project has secured £16.8m from a mixture of public and private sources.

Cornwall Council has made a £9.9m contribution from its final round of  European Regional Development funding. the council itself has put in £1.4m, and institutional investors have contributed another £5.5m.

The funding will pay for drilling one well, a research programme and a heat main, to prove the extent of the resource 4.5km down in the granite that lies beneath the Eden site.

This first well will initially supply a district heating system for Eden’s biomes, offices and greenhouses. It will pave the way for the second phase, which is based around a second 4.5km well and an electricity generating plant.

Completing the second phase will mean that Eden could generate enough renewable energy to be carbon positive by 2023, while also providing heat and power for the local area.

Eden co-founder Sir Tim Smit said that securing the funds was a chance to spark an energy revolution.

He said: “Since we began, Eden has had a dream that the world should be powered by renewable energy. The sun can provide massive solar power and the wind has been harnessed by humankind for thousands of years but because both are intermittent and battery technology cannot yet store all we need there is a gap.

“We believe the answer lies beneath our feet in the heat underground that can be accessed by drilling technology that pumps water towards the centre of the earth and brings it back up superheated to provide us with heat and electricity.”

We are looking to stimulate a whole new Green Tech industrial cluster in Cornwall, on the back of the centuries of mining heritage in the county

A new company, Eden Geothermal Limited (EGL), will deliver the plan. Its shareholders are the Eden Project charity and visitor attraction; EGS Energy Limited, a geothermal development and consultancy group; and BESTEC (UK), which is part of the German specialist geothermal developer and drilling advisor.

The University of Exeter will also provide academic and research services to the project.

Richard Day, EGL non-executive chairman, said: “The support we have received from all our stakeholders will allow us to prove the resource in this part of Cornwall.

“Alongside the other geothermal project in Cornwall at United Downs, we are looking to stimulate a whole new Green Tech industrial cluster in Cornwall, on the back of the centuries of mining heritage in the county.”

At Cornwall Council, the cabinet portfolio holder for climate change and neighbourhoods, Edwina Hannaford, sees the project as a pathfinder for further exploitation of Cornwall’s geothermal resources.

“Unlike other renewable sources where energy is dependent on the wind or the sun, deep geothermal offers a stable consistent and secure source of energy.

“If we can find a way to exploit geothermal power successfully, these hot rocks have the potential to provide Cornwall with a rich source of strategic minerals and renewable energy, as well as significant benefits to the local economy from jobs, research and investment.

The EGS Energy team was part of the Hot Dry Rocks geothermal programme in Cornwall in the 1980s, the follow-on EU programme in Soultz-sous-Forêts, France and the subsequent commercial power generating projects in Landau and Insheim, Germany, among others worldwide.

Guy Macpherson-Grant, managing director of EGS Energy, said: “It is exciting that this geothermal development is under way. The geology in the county is particularly well-suited for cost-efficient heat and power generation, and St Austell benefits from particularly high heat flows.”

Dr Robin Shail, senior lecturer in geology at the University of Exeter, said: “Cornwall is rapidly re-establishing itself as the UK centre for deep geothermal energy and we’re delighted to be involved in this major project in which we will contribute towards achieving research objectives and training of the next generation of scientists and engineers to work in this emerging sector.”